Electricity generation is the process of generating electric power from sources of primary energy. For utilities in the electric power industry, it is the stage prior to its delivery to end users (transmission, distribution, etc.) or its storage (using, for example, the pumped-storage method).

A characteristic of electricity is that it is not freely available in nature in large amounts, so it must be produced. Production is carried out in power stations (also called “power plants”). Electricity is most often generated at a power plant by electromechanical generators, primarily driven by heat engines fueled by combustion or nuclear fission but also by other means such as the kinetic energy of flowing water and wind. Other energy sources include solar photovoltaics and geothermal power.

Electric generators transform kinetic energy into electricity. This is the most used form for generating electricity and is based on Faraday’s law. It can be seen experimentally by rotating a magnet within closed loops of conducting material (e.g. copper wire). Almost all commercial electrical generation is done using electromagnetic induction, in which mechanical energy forces a generator to rotate: 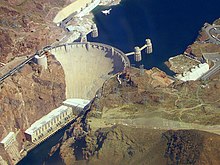 Large dams such as Hoover Dam can provide large amounts of hydroelectric power; it has 2.07 GW capability.

Electrochemistry is the direct transformation of chemical energy into electricity, as in a battery. Electrochemical electricity generation is important in portable and mobile applications. Currently, most electrochemical power comes from batteries. Primary cells, such as the common zinc–carbon batteries, act as power sources directly, but secondary cells (i.e. rechargeable batteries) are used for storage systems rather than primary generation systems. Open electrochemical systems, known as fuel cells, can be used to extract power either from natural fuels or from synthesized fuels. Osmotic power is a possibility at places where salt and fresh water merge.

The photovoltaic effect is the transformation of light into electrical energy, as in solar cells. Photovoltaic panels convert sunlight directly to electricity. Although sunlight is free and abundant, solar power electricity is still usually more expensive to produce than large-scale mechanically generated power due to the cost of the panels. Low-efficiency silicon solar cells have been decreasing in cost and multijunction cells with close to 30% conversion efficiency are now commercially available. Over 40% efficiency has been demonstrated in experimental systems. Until recently, photovoltaics were most commonly used in remote sites where there is no access to a commercial power grid, or as a supplemental electricity source for individual homes and businesses. Recent advances in manufacturing efficiency and photovoltaic technology, combined with subsidies driven by environmental concerns, have dramatically accelerated the deployment of solar panels. Installed capacity is growing by 40% per year led by increases in Germany, Japan, United States, China, and India. 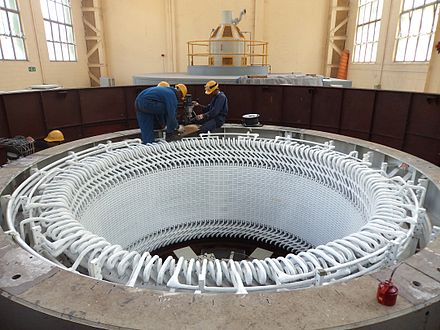 Electric generators were known in simple forms from the discovery of the magnetic induction of electric current in the 1830s. In general, some form of prime mover such as an engine or the turbines described above, drives a rotating magnetic field past stationary coils of wire thereby turning mechanical energy into electricity. The only commercial scale electricity production that does not employ a generator is solar PV.

Almost all commercial electrical power on Earth is generated with a turbine, driven by wind, water, steam or burning gas. The turbine drives a generator, thus transforming its mechanical energy into electrical energy by electromagnetic induction. There are many different methods of developing mechanical energy, including heat engines, hydro, wind and tidal power. Most electric generation is driven by heat engines. The combustion of fossil fuels supplies most of the energy to these engines, with a significant fraction from nuclear fission and some from renewable sources. The modern steam turbine (invented by Sir Charles Parsons in 1884) currently generates about 80% of the electric power in the world using a variety of heat sources. Turbine types include:

Although turbines are most common in commercial power generation, smaller generators can be powered by gasoline or diesel engines. These may used for backup generation or as a prime source of power within isolated villages.

How Electricity Generated, Transmitted And Distributed

Why Electricity generated in Multiples of 11kv,22kv,33kv and 66kv ?